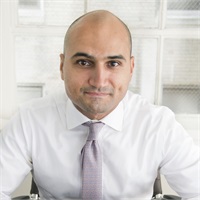 Jose Rivera joined Wealth Advisory Group to continue his long tenure in the financial services field. Since college, Jose has been in entrepreneurship roles. Jose started as a stockbroker trainee, and quickly moved into financial services. Jose started at Northwestern Mutual in 2011, and spent the next six years building a thriving business. While at Northwestern Mutual, Jose was a leading advisor in the east coast, achieving the prestigious Bronze award in his first year, and Silver in his second year.

After being introduced to Wealth Advisory Group and Managing Partner, Adam Kaufman, Jose decided it was time for a change. He made the decision to transition to Wealth Advisory Group, where he is excited to utilize the philosophy of the firm, as well as help build the culture. Jose holds his Life & Health Insurance License, Series 6 and Series 63.

Jose is a native New Yorker turned New Englander, having moved to Massachusetts in his teenage years. Jose has a love of sports that was inspired early on by his father, Roland James, who played as a defensive back for the New England Patriots. In his spare time, Roland would coach Jose’s high school football team, solidifying Jose’s love of football. In addition to football, Jose stayed active growing up with wrestling and track.

Jose currently resides in Kew Gardens, Queens with his wife, Minna, and daughter, Penelope. Jose is an avid runner and enjoys yoga. In addition to keeping active, Jose enjoys nonfiction reading and living healthfully, focusing on books that push his own development. Jose believes strongly in the philosophy of do onto others as you would want done to you, which he takes into every client meeting along with his strong belief system and positive energy.

Get Financial News & Updates Delivered to Your Inbox